The United States is in the midst of legislative negotiations over tax reform. There has been speculation that there may be another government shutdown if an agreement is not reached prior to December 22, 2017. 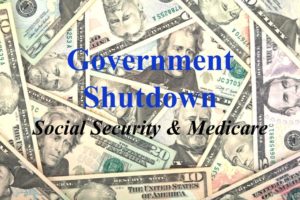 What happens to Social Security and Medicare benefits if there is a government shutdown?

If a shutdown occurs, most government services will be halted but Social Security and Medicare services are considered to be “essential” and will continue to operate.  That means that claims will be paid and benefit recipients will be paid.

However, here are some situations where there might be significant delays.

These delays are due to many government positions not being considered essential and those employees will not be working.

A government report issued after the 2013 shutdown noted that almost 1600 medical determinations a day were delayed and almost 10,000 SSI recertifications were delayed due to that shutdown. Hopefully, we will avoid a shutdown and more delays in an already long and frustrating process.

If you have questions or concerns, contact Match & Farnsworth to learn more.

It is always wise to seek the advice of an attorney if you are concerned or have additional questions about how you will be affected.  Contact Match and Farnsworth PC at 801-532-4556 for a consultation.