Diversity, Inclusion, and Equity: These may seem like the latest “corporate buzz words” but in reality, the Utah State Bar has been formally dedicated to improving diversity among its Board of Bar Commissioners and among bar membership for decades. This began with creating ex-officio positions on the Board of Bar Commissioners for the Utah Minority Bar in 1992 and Women Lawyers of Utah in 1993, 1 and more formally by adopting the Utah State Bar Statement on Diversity and Inclusion in December 2, 2011. The statement is as follows:

The Bar values engaging all persons fully, including persons of different ages, disabilities, economic status, ethnicities, genders, geographic regions, national origins, sexual orientations, practice settings and areas, and races and religions. Inclusion is critical to the success of the Bar, the legal profession, and the judicial system. The Bar shall strive to:

1. Increase members’ awareness of implicit and explicit biases and their impact on
people, the workplace, and the profession;
2. Make Bar services and activities open, available, and accessible to all members;
3. Support the efforts of all members in reaching their highest professional potential;
4. Reach out to all members to welcome them to Bar activities, committees, and
sections; and
5. Promote a culture that values all members of the legal profession and the judicial
system.

See:https://www.utahbar.org/baroperations/#:~:text=Commission%20Diversity%20and%20Inclusion%20Statement&amp;text=The%20Bar%20values%20engaging%20all,areas%2C%20and%20races%20and%20religions. Diversity, in this policy, relates to gender, race, and sexual orientation as one might expect, but also reflects a commitment of the Bar to promote diversity with respect to geographic regions, practice settings, etc. This is reflected in practice as the Bar strives to include members from each Division and from a variety of practice areas when forming committees or evaluating awards, and so on. 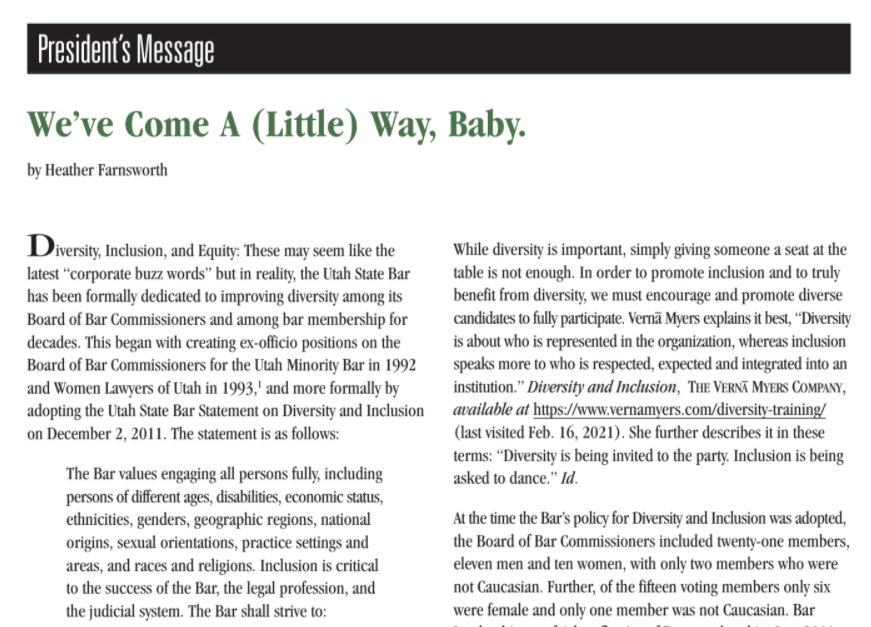 While diversity is important, simply giving someone a seat at the table is not enough. In order to promote inclusion and to truly benefit from diversity, we must encourage and promote diverse candidates to fully participate. Verna Myers explains it best, “Diversity is about who is represented in the organization, whereas inclusion speaks more to who is respected, expected and integrated into an institution.” See https://www.vernamyers.com/diversity-training/. She further describes it in these terms: “Diversity is being invited to the party. Inclusion is being asked to dance.” Id.

At the time of the Bar’s policy for Diversity and Inclusion inception, the Board of Bar Commissioners included twenty-one members, composed of eleven men and ten women, and only two members who were not Caucasian. Further, of the fifteen voting members, only six were female and only one member was not Caucasian. Bar Leadership was fairly reflective of Bar Membership. In a 2011 survey, Bar
members identified themselves as 76% male and 24% female. (2020 Bar Survey Member Survey, Final Results, page 9). Bar membership was 91% Caucasian, 2% Hispanic/Latinix, 2% Multiracial, 1% Asian/Pacific Islander, 0% American Indian/Native American, 0% Black/African American, 1% other, and 2% preferring not to disclose. The Bar’s demographics differed significantly from Utah’s demographics
at the time, especially regarding gender. According to the United States Census Bureau, population estimates in 2010 showed that Utah was comprised slightly more women than men with an estimated 49.6% of the population reported as female. See https://www.census.gov/quickfacts/fact/table/UT/PST040219#PST040219. The Bar’s population more closely reflected the Utah Population with respect to race; however, there was a significant disparity in the amount of Hispanic/Latinix lawyers when compared with the overall population. In 2010 Utah’s population was 77% Caucasian, 14.4% Hispanic/Latinx, 2.6% Multiracial, 2.7% Asian, 1.1% Native
Hawaiian or Pacific Islander, 1.5% American Indian/Native American, and 1.5% Black/African American.

Currently, the Board of Bar Commissioners more closely reflects Utah’s general population with respect to gender. The Board is comprised of twenty-seven members: thirteen of which identify as male and fourteen of which identify as female (51.85%). Bar leadership reflects a similar make up: the executive committee is comprised of three identifying as male and four identifying as female (57.15%). However, some disparity remains with voting members of the Bar, as nine identify as male and only six identify as female (40%). Regarding race, the Board of Bar Commissioners has much room for improvement with approximately 88.89% of its members being Caucasian and 93.33% of voting members.

This is where the concept of Equity comes in to play. If equality is the goal, equity is the means to achieve this. Equality is typically defined as treating everyone the same and giving everyone the same access to opportunities. https://www.dictionary.com/browse/equality. Workplace equality does not take demographic related need into account, while equity strives to identify the specific requirements of an individual’s needs based upon ethnicity, age, gender identity, economic status, and so on.
https://www.kellyservices.us/us/business_services/business-resource-center/managing-employees/the-important-difference-between-workplace-equity-and-equality/#:~:text=Workplace%20equality%20does%20not%20take,in%20an%20unfair%20work%20envir
onment.&amp;text=On%20the%20other%20hand%2C%20equity,sexual%20orientation%2C%20and%20so%20on.

In a recent CLE on the subject, ABA President Patricia Lee Refo explained equity with this example: Suppose Ms. Refo, a woman who stands at five feet something and Mr. LeBron James, a professional basketball player who stands at six feet and nine inches are each trying to see over the top of a nine- foot-tall fence. If both persons are given an equal stool measuring two feet and six inches, only Mr. James is able to see over the fence. If we take into account that Ms. Refo and Mr. James are not at the same starting point with respect to height and we provide Ms. Refo a step-ladder measuring three feet six inches instead, we have achieved equity as both individuals may now see over the fence.

So, why is equity important? Equity is important in the workplace as it has been demonstrated to improve cognitive diversity in decision-making, to drive engagement by employees, and to prevent dissatisfaction and employee attrition, all of which result in an improved bottom line. See https://www.hrtechnologist.com/articles/diversity/workplace-equity-diversity-inclusion/ More importantly, equity is an essential concept in ensuring access to justice. Increased access to justice depends on public confidence in the justice system. https://www.usip.org/guiding-principles-stabilization-and-reconstruction-the-web-version/rule-law/access-justice. Public confidence in the
justice system is more likely to increase with a judiciary and bar that reflects the make-up of the public.

Historically, the legal profession has been one of the least diverse professions in the nation, and it continues to be so. https://www.americanbar.org/groups/litigation/committees/diversity-inclusion/articles/2016/spring2016-0416-diversity-in-law-who-cares/. According to the ABA, “diversity in the legal profession is necessary to demonstrate that our laws are being made and administered for the benefit of all persons. Because the public’s perception of the legal profession often informs impressions of the legal system, a diverse bar and bench create greater trust in the rule of law.” Id. The ABA argues, “Beyond the public perception and confidence in our system diversity affects the quality of legal services and judicial decisions.” Id. The ABA finds “A diverse legal profession is more just,
productive, and intelligent because diversity, both cognitive and cultural, often leads to better questions, analysis, solutions, and processes.” Id.

So how do we, as a Bar, become more representative of our membership and our general population? Again, the answer is equity. We need to take the initiative to provide opportunities to diverse populations to give that extra boost of encouragement. To harken back to Ms. Myer’s analogy, we need to not only invite people to the party, but invite them to dance, and to participate on the party planning committee. As a result of the results of the survey, the Bar has created the Bar Committee on Early Diversity Outreach, chaired by third division representative Mark Morris, who is working in conjunction with the Utah Center for Legal Inclusion to introduce young kids to lawyers of all backgrounds to encourage them to consider pursuing a legal education. In addition, we have created a new position, Director of Diversity, Inclusion, and Equity, to be held by the Bar’s CLE director Michelle Oldroyd, to ensure the Bar offers educational programing consistent with these ideals.

In my relatively short time on the Bar Commission, I have felt a shift demonstrated beyond the numbers, with respect to Bar Leadership. I joined the commission as an ex-officio representative of the Women Lawyers of Utah in 2012. When I noticed the lack of female voting commissioners, I decided to run to represent the third division. At the time, a female colleague, who was also heavily involved with the Women Lawyers of Utah planned to run as well. Though there were multiple positions available, there was concern that two women running may somehow dilute the vote for each of us. Admittedly, I too believed this may be a problem, and felt some relief when my colleague elected not to run for other reasons. In retrospect, I am embarrassed and ashamed of this thinking; but at the time, it seemed a valid concern. When I ran for President-Elect, in 2019, the consensus seemed to be in part, that it was “time” for a woman to be president again. When I was elected, I became the sixth female president of the Utah State Bar. The current President-Elect, Heather Thuet, and I will be the first two women to serve consecutive terms. Now, the current candidate for President-Elect, Katie, Woods, will mean three women will serve in a row, and we are getting closer to the distinction becoming less about our gender. Ms. Woods, for example, is a small firm attorney from St. George, adding an entirely different of level of diversity. I might add, there was little to no discussion over the gender of these candidates, at least that I knew of, and the discussion focused on the years of service each offered to the Board of Bar Commissioner’s and their plan of leadership going forward. The culture is shifting at this level, and my hope is that this shift will soon pass to the general membership of the bar so that we may more accurately reflect the general population of Utah in our legal community, to ensure access to justice is justice for all.